The coronavirus crisis has turned many Americans into amateur data scientists who are studying health data and statistics on a daily basis.

Are the rates of infections rising? Are they rising but accelerating or decelerating? Are the infections rising because of viral spread or because of more testing? How many people are dying each day? Does the data indicate that the virus is dangerous for only old people or young people as well? In many ways solving this crisis hinges on our mastery of data analytics, a subject we specialize in.

By now, the data is clear that coronavirus is dangerous for people of all ages, but it’s particularly lethal for older individuals.

In this article, the team at MastersofBusinessAnalytics.com was compelled to review just how many Americans are over the age of 65 in various places across the country. While this data analysis doesn’t show us how to solve the problem, it can show us just how large the devastation could be.

Across the country, there are over 51 million Americans that are over the age of 65, comprising 16% of the population. Maine and Florida lead the nation with the highest proportion of their population being over the age of 65. Alaska and Utah are the states with the lowest rates of elderly people. Among the largest hundred cities in America, Scottsdale, AZ and Honolulu, HI have the populations with the highest percentage of older Americans.

It’s important to note that coronavirus is serious for all individuals, not just the elderly. The disease can be debilitating and sometimes deadly, even if you’re healthy.  Even if you’re “asymptomatic” (meaning you have contracted coronavirus and might not know it because you show no symptoms) you could spread it to someone else who could experience very adverse consequences and possible death.

This is to say, it’s important to show the number of people across America that are above 65 years old because they are the most at risk, but that does not absolve younger people from the risks or responsibilities.

The chart below shows that states that have the highest percentage of their population aged 65 and above: 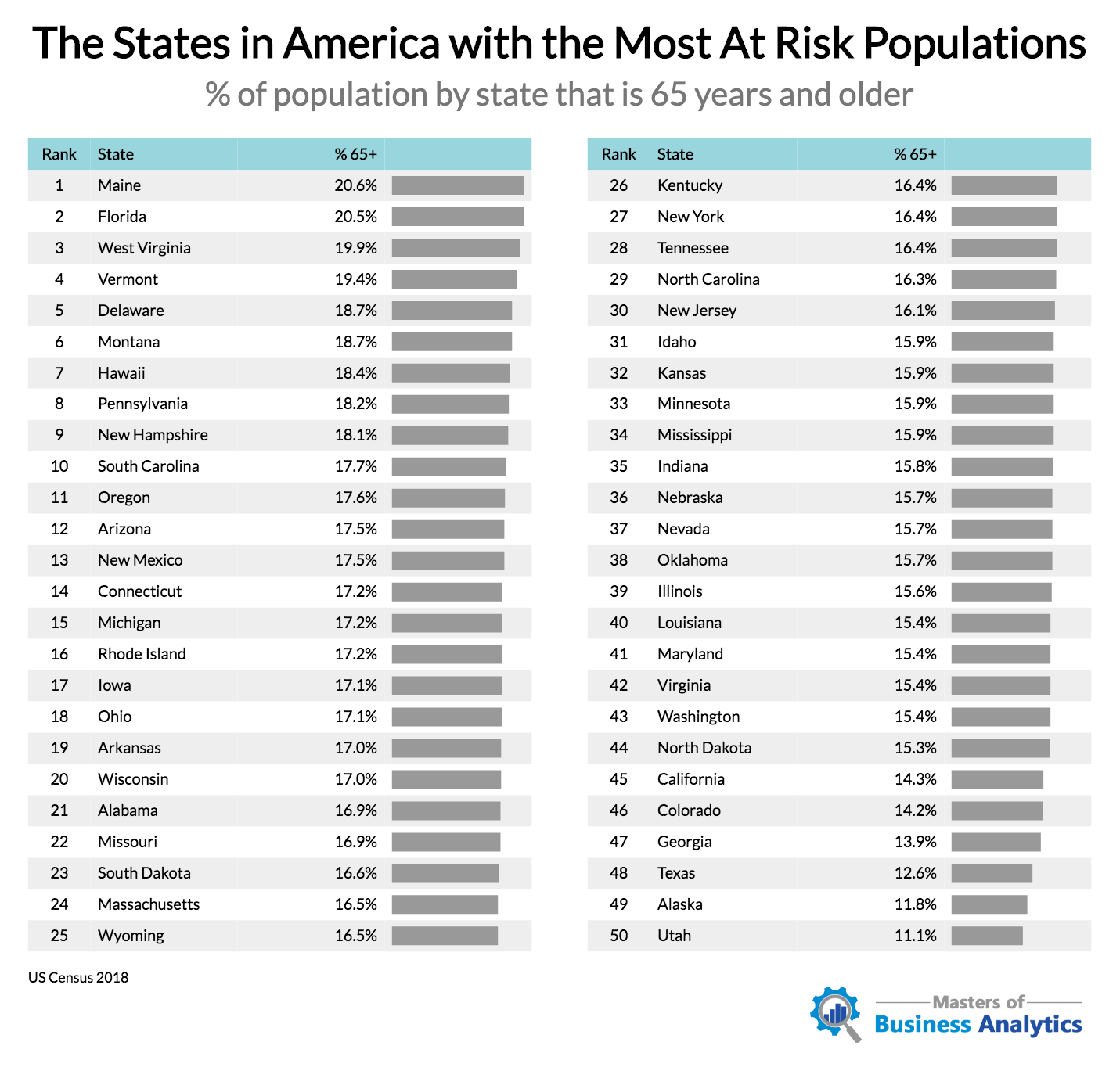 But just how many older Americans are at risk in each state? While the prior chart looked at the percentage of the population that was over 65, the next chart shows the number of people in each state that are over 65 (in millions). 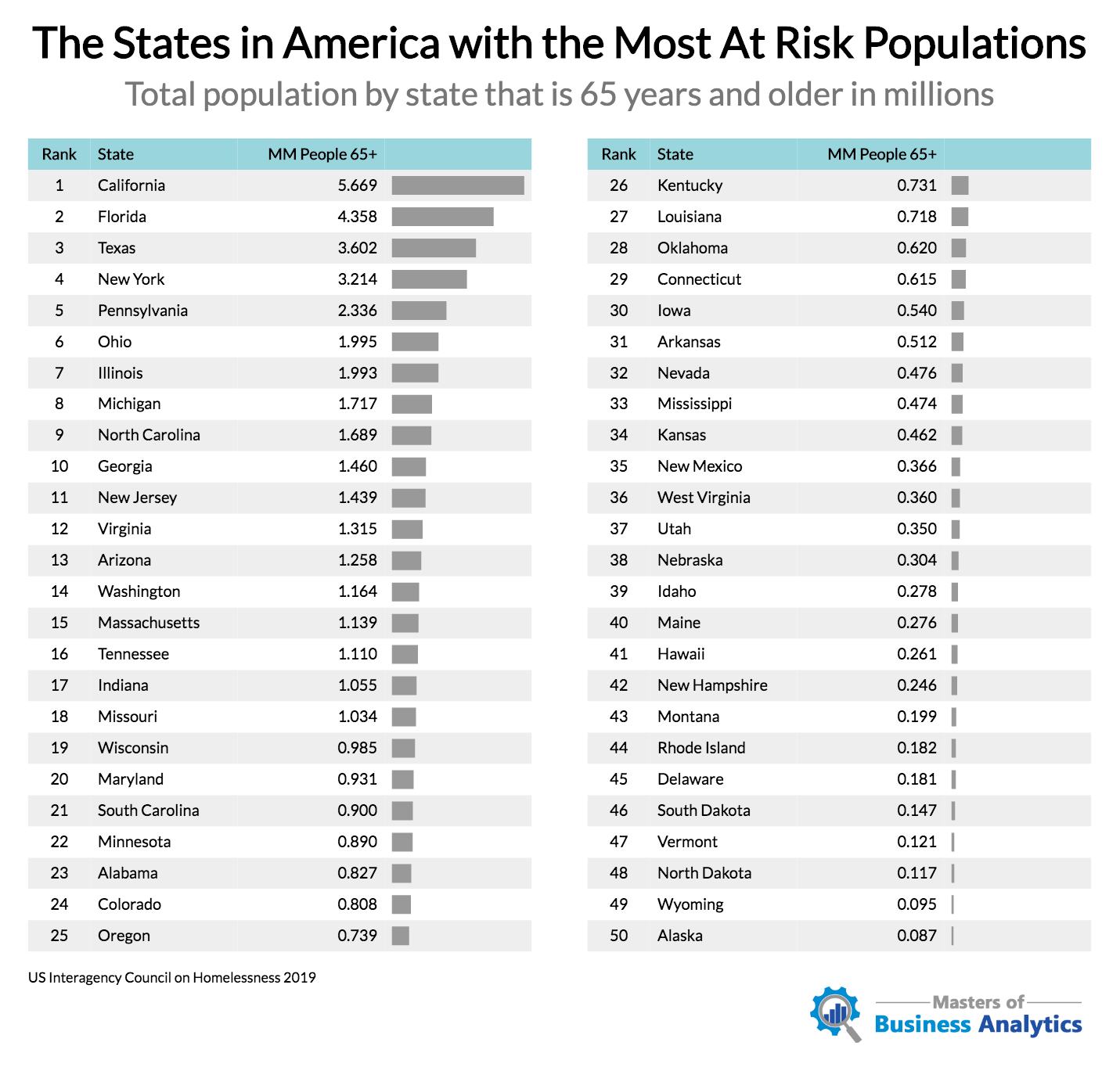 Next, let’s look at the cities with the highest percentage of inhabitants over the age of 65: 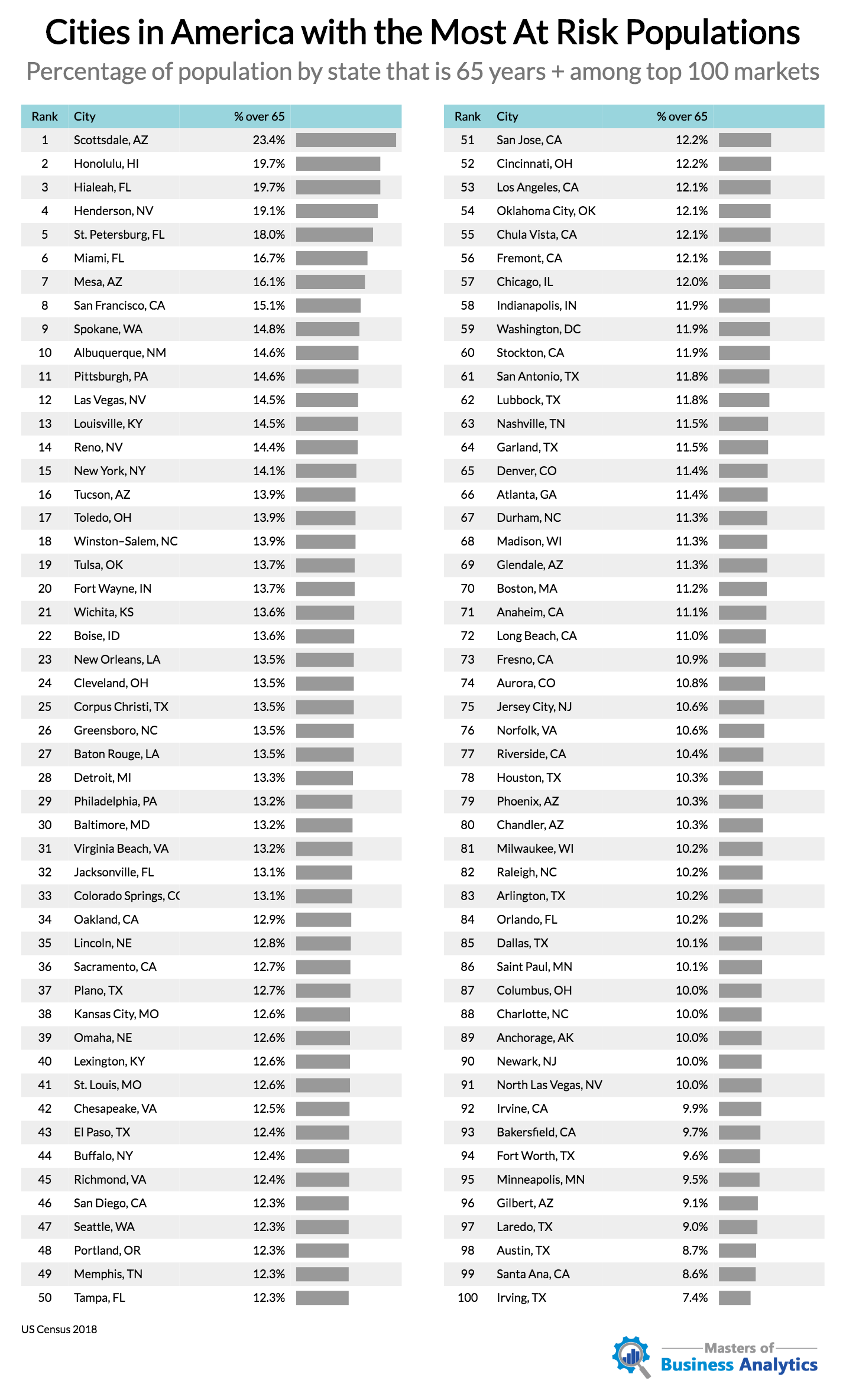 Scottsdale, AZ, an attractive retirement destination, has the highest percentage of people over the age of 65 by a significant margin. Scottsdale is followed by Honolulu, HI and Hialeah, FL, two warm locations favored by retirees.  Larger cities like Miami and San Francisco also make the top ten cities with a percentage of older Americans.

Lastly, let’s look at which cities have the most people over the age of 65 living there: 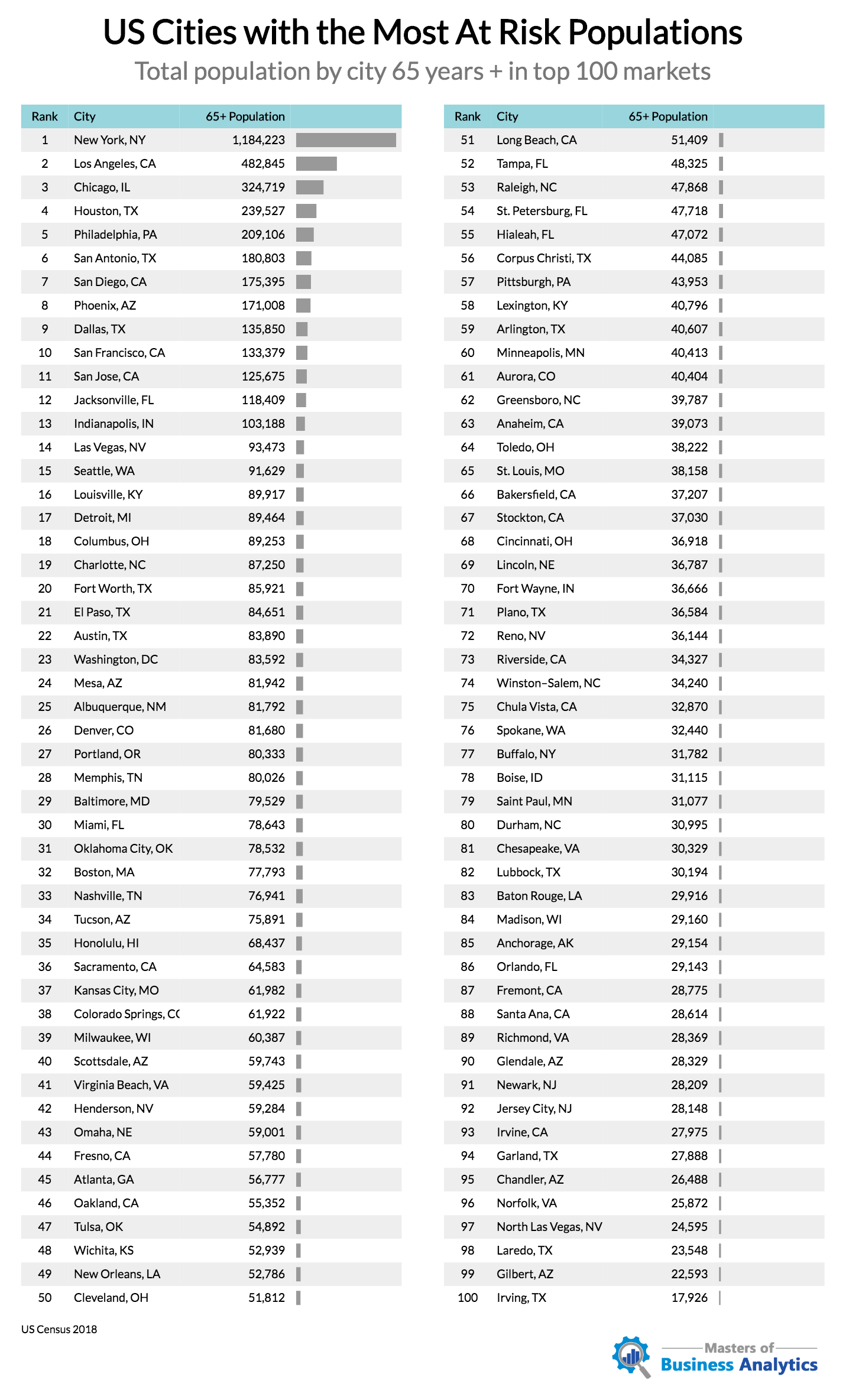 New York City has the most inhabitants over 65+ years old by a huge margin. Almost 1.2 million New Yorkers are over the age of 65, more than twice as many as the second place city, Los Angeles. New York City currently has the highest know number of coronavirus infections in America by a large margin and may soon exceed the total in Wuhan, China.

In discussions about how to solve the coronavirus economics crisis, some people have suggested that high risk elderly people just need to avoid the virus or that only a small number of people are really at risk. While this sentiment is misguided on a number of different levels, it overlooks the sheer quantity of Americans that are at risk simply because of their age. In states like Florida and Maine and cities like Scottsdale, it would mean risking the health and lives of an enormous part of the population.

Information is power. Please share our content for editorial or discussion purposes. All we ask is that you link back to this page and give proper credit to our author.

MastersofBusinessAnalytics.com is a digital publication created to help showcase careers,  degrees and newsworthy developments for professionals interested in business analytics, data science, and data modeling. Gaining experience in this emerging field has a lifetime of benefits in a number of industries. Thanks for joining us!

Jen Hood, Data & Predictive Analytics Expert. Jen has over 15 years of analytics experience working both with small, local businesses and large multi-nationals. She is our In-House Career Expert for MastersofBusinessAnalytics.com and founder of The Career Force.  You can find her on Linkedin, Instagram, and YouTube.

How to Get Started